Science among temples and agoras

—From Mesopotamian scribes to heated debates in the plazas of classical Greece. Thus, knowledge was constructed in the Mediterranean societies of Antiquity.—

Researchers require institutions that employ them or provide them with space to present their ideas. It is often necessary for their work to be perceived as useful or practical and for them to be given incentives for it. However, as research becomes institutionalised, the individual’s options for innovation are reduced. Yet those who decide to go their own way and seek independence may find themselves without work and without an audience, and thus their ideas are very unlikely to survive. The price of independence may be utter oblivion. Following these dilemmas, the societies of Antiquity offered different models for the development of research, either coordinated by the State and power, or leaving the people concerned free to take their own initiative. 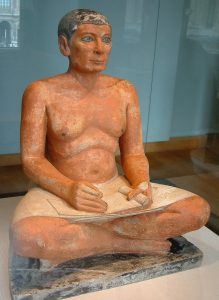 In ancient times, temples were among the most important settings for the production of knowledge. This was the case in Babylon and Uruk, in Mesopotamia. In Greece, the centres of the most popular medical practices were impressive sanctuaries dedicated to gods and heroes like Asclepius. Institutions such as the Museum (the place to worship the Muses), with a community of resident scholars, and the Library of Alexandria, both founded by the Ptolemaic dynasty (from the fourth to the first centuries BC), would be truly exceptional as places specifically dedicated to the conservation and cultivation of knowledge, due to their volume and long duration. Their composition is difficult to establish but at certain times the latter institution reached 400,000 rolls of papyrus, the medium on which the accumulated knowledge was conserved. 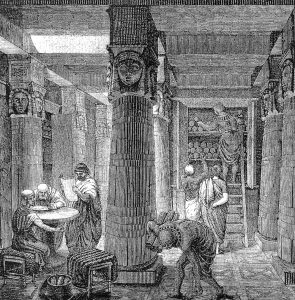 The Library of Alexandria in an artistic reconstruction based on archaeological data. Wikipedia.

Galen explained that all books arriving in Alexandria by boat had to pass through the Library of Alexandria. Once copied, the originals were stored and the owners received a copy. As a result, the library became a centre of research where knowledge of subjects such as mathematics, astronomy and natural sciences among others was constantly being gathered. These treatises, of which there were sometimes several copies, were subjected to strong textual criticism. Alexandria also became the most important medical teaching centre of its time, with teachers such as Herophilus and Erasistratus, the first pioneers of the systematic dissection of human corpses. However, on many occasions, myth and legend have been excessively mixed with reality when referring to the Library. For example, rather than a single terrible fire that was the cause of its destruction, we should talk about different fires suffered over the years. The destruction at the end of the fourth century are also unclear, as is the effect that the Muslim conquest would have in the seventh century.

Greece had few work positions for its scholars and in order to increase their reputation and earn a living as teachers, everything depended on the skill that they could demonstrate in public debate. The tradition of debate was established as an institution. The widespread rivalry of Greek intellectual life was linked to the lack of fixed or official positions and the need to gain a reputation as a teacher. This made it possible to explore many more theoretical possibilities but also meant that a common consensual basis from which to develop a theoretical research framework was never formed. There was, rather, an accumulation of different visions. 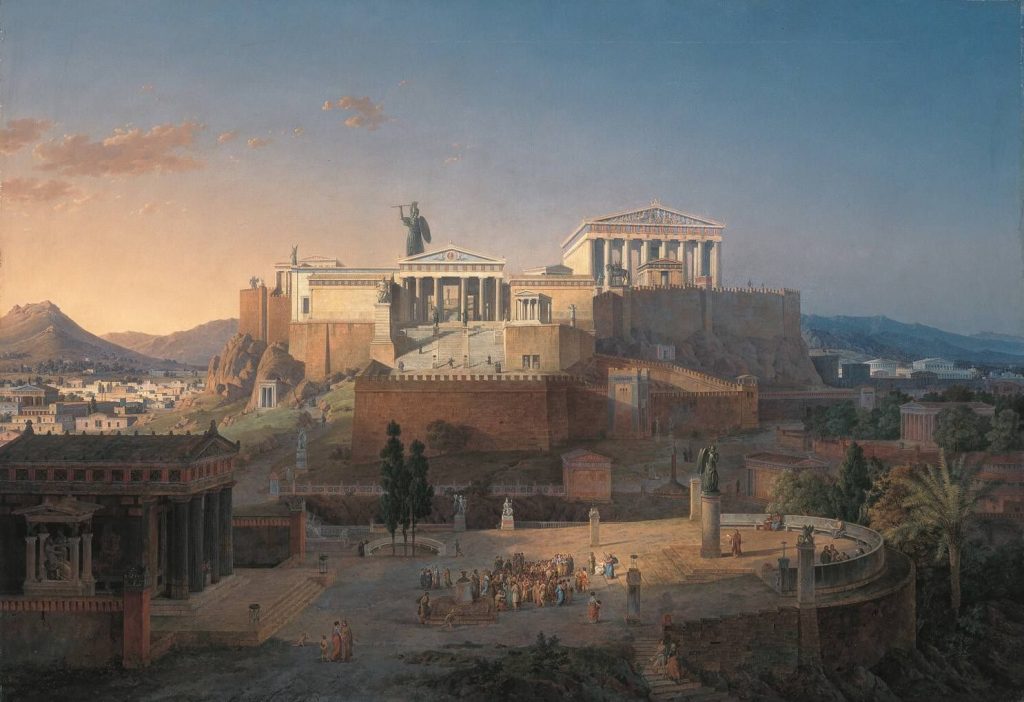 The Acropolis of Athens according to Leo von Klenze (Munich, 1846). Wikipedia.

In the Greek world, there was a proliferation of ‘specialists’ who went from city to city selling their services. Some passed their knowledge to their children; the sophists are a very clear case. They taught about a very wide range of knowledge: astronomy, geometry, grammar, theology, literature, etc.  These teachings often depended on their audiences as, depending on the city, there were different interests to which they adapted. In a society without degrees or diplomas, it was certainly very necessary to show their knowledge in order to get work. In addition, these teachers served in powerful houses where they taught privately.

The Greeks were tireless arguers. The spread of democracy and the influence of the sophists contributed to everything being able to be discussed and anyone being able to participate in discussion. Many travelling teachers went to agoras and gymnasiums to show their dialectical skills. The Greeks added a strong competitive spirit to the taste for discussion. Religious festivals were a time for competitions in sanctuaries where scholars would face each other in public until glory was won or lost. These debates did not have rules until they were set by Aristotle in his ‘dialectical method’. From Plato’s time, the most thing was debating, which was reserved for wise mathematical philosophers. Nevertheless, what was important was not one’s own opinions, as in the case of the sophists, but objective truths.

Oral lessons and debates, with long speeches or answers to questions, were very frequent. The houses of the rich, plazas, public gymnasiums and palaestrae, with porches and benches to sit on, were the usual settings for the wise teachers’ speeches. Each school, referred to according to its teaching or physical location, preferred a certain setting and method. Socrates preferred to teach in public places since payment was not important to him. The Academics, Peripatetics, Stoics and others preferred to teach in indoor spaces, which were well-equipped with scientific instruments and libraries, and even in the wealthiest homes. Only an indoor space allowed attendees to be charged payment.

The most famous teachers (doctors, philosophers or priests) were sought after by students, and schools were formed according to this association. Lessons were written down and formed the doctrinal heritage of these centres. This would be the case of the Hippocratic Corpus in Kos, or the Cnidian Sentences in Cnidos. Some teachers like Plato, on the other hand, refused to write down their philosophy. Thus, it was difficult to create a school but this encouraged many others to write about him. The teacher could not be countered to in any way. He completely set the school’s way of thinking (except in the case of Plato as has been mentioned). It is not surprising, therefore, that there was a custom of burying the deceased teacher in the place of teaching. 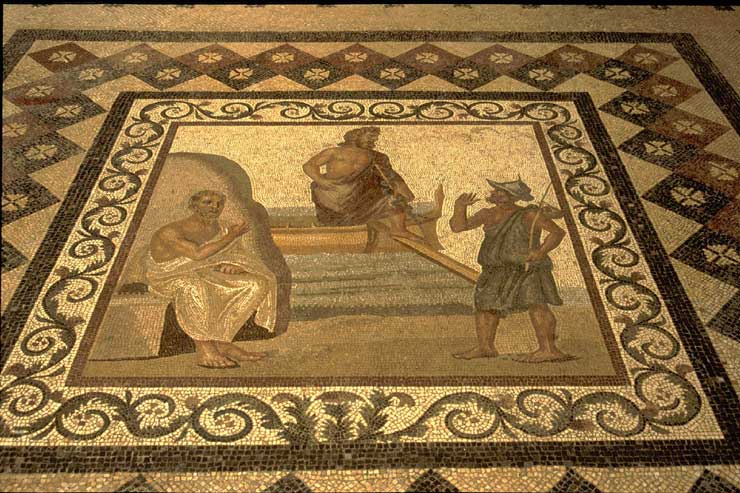 Mosaic of the Asclepeion of Cos, with Asclepius in the centre, Hippocrates on the left and an inhabitant of Cos on the right. Wikipedia.

Without doubt, the most popular teaching environments were in Athens. Outside its walls there were three large sanctuaries with gymnasiums, gardens, porches and other facilities: the Academy (dedicated to the hero Academus), the Cynosarges (dedicated to Hercules) and the Lyceum (dedicated to Apollo, the wolf hunter). These gardens and porches were places of meeting and recreation, especially dedicated to talks and discussions. Plato established his school in the gymnasium of the Academy, while Aristotle preferred the Lyceum. This had a long covered walkway known as the peripatos, where he gave his lessons. As a result, this school was known as that of the Peripatetics. These institutions resembled each other; there were young students and teachers who researched and taught. But they all lived independently, as there was no pay, requiring their members to be financially stable. 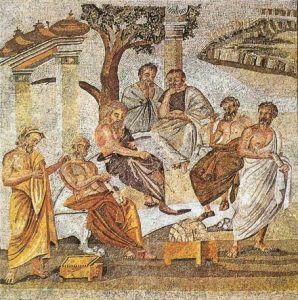 All these schools providing higher education in Athens were completely private, without any control from the State or receiving any financial aid or subsidies. However, there were differences. While members of the Academy were more engaged in discussion and emphasised the teaching of mathematics, at the Lyceum, formal and systematic instruction and mathematics was overlooked so they focused on the empirical study of nature and of legal and social knowledge instead. At the Lyceum, anatomical tables, geographical charts, celestial globes and charts of the stars were used. Students were not prepared for political life but to have a happy life. Aristotle and his school enjoyed a great heritage, essential in order not to depend on anyone. It was his disciple, Theophrastus, who consolidated the Peripatetic school, which continued to be run by successive teachers.

There were many schools and they evolved over time until they went into crisis, some reappearing again later and others ending in decline instead. However, they all shared three interests: developing the theoretical inspiration of their founder towards the areas that he had rejected or ignored, critically editing and interpreting his writings and holding arguments with the other schools.

Rome did not promote the creation of philosophical schools. Many Greek teachers continued to work for the Romans or would be thrown out, and some schools of thought would succeed the ancient Greek ones that had disappeared. There would even be a revival of Platonic thought. Little is known about these schools, sometimes funded by the same emperor, as was the case of Marcus Aurelius, who, in 176, founded a series of centres in Athens in all branches of knowledge and the philosophy of the most important classical schools. However, for physicians who were contemporary with this emperor, the outdoors could be a good means of teaching. A Roman citizen could witness events as unedifying today as a vivisection. In fact, Galen carried out a systematic programme of animal dissections that allowed him to create an anatomical image of the human body by analogy. The physician sought to cause amazement among his audience thanks to the great visual, cognitive and emotional impact of his work, an impact that raised the logical strength of his arguments. Performing dissections was key to Galen’s reputation and triumph over his opponents.

How to cite this paper:
Ferragud, Carmel. Science among temples and agoras. Sabers en acció, 2020-11-27. https://sabersenaccio.iec.cat/en/science-among-temples-and-agoras/.