—The desire to compile all acquired knowledge: Aristotle and Pliny the Elder.—

The Greeks and Romans felt the need to bring order to all acquired knowledge. Aristotle and his school stood out for their attempt to analyse and order all the phenomena of human life and nature from a united view. The famous philosopher rejected Platonic ideas and considered sense perception to be the source of objective knowledge. However, the attention given to empirical data did not regard individual things as individual things. The scholar was interested in universal values, not in particular things. Aristotle’s phainomena directly refer to that which can be perceived with the senses and seems to be true (‘according to perception’). Observations lead to the problems that need to be solved. It was not unusual for Greek science to have research programmes to solve extremely specific problems. We owe the first of these projects aimed at empirical research in natural sciences, due to the causal explanations it can contribute, to Aristotle. 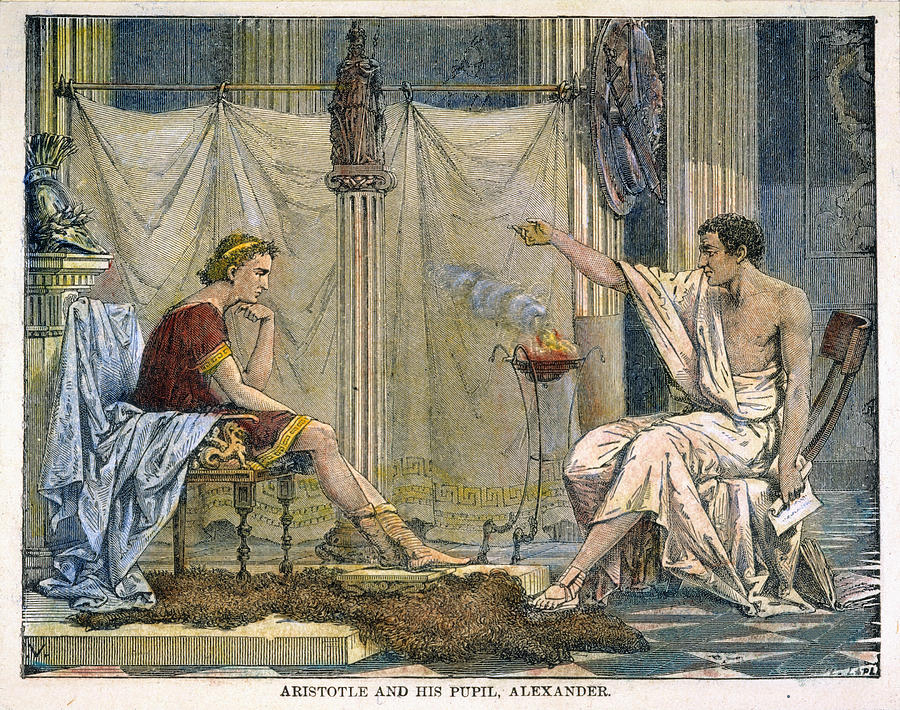 Aristotle developed a teleological understanding of nature, built on a rational principle according to which everything pursues a certain end. In biology, this led to the idea that the morphology of an organ is determined by its function. Anatomy, therefore, held only a secondary position with regard to physiology. Based on this idea of nature, Aristotle developed a research programme based on the method of approaching the phenomena, from which theoretical questions of a causal and genetic nature could be addressed. He thus merged an inductive starting point with a deductive process, heavily charged with theoretical speculation. 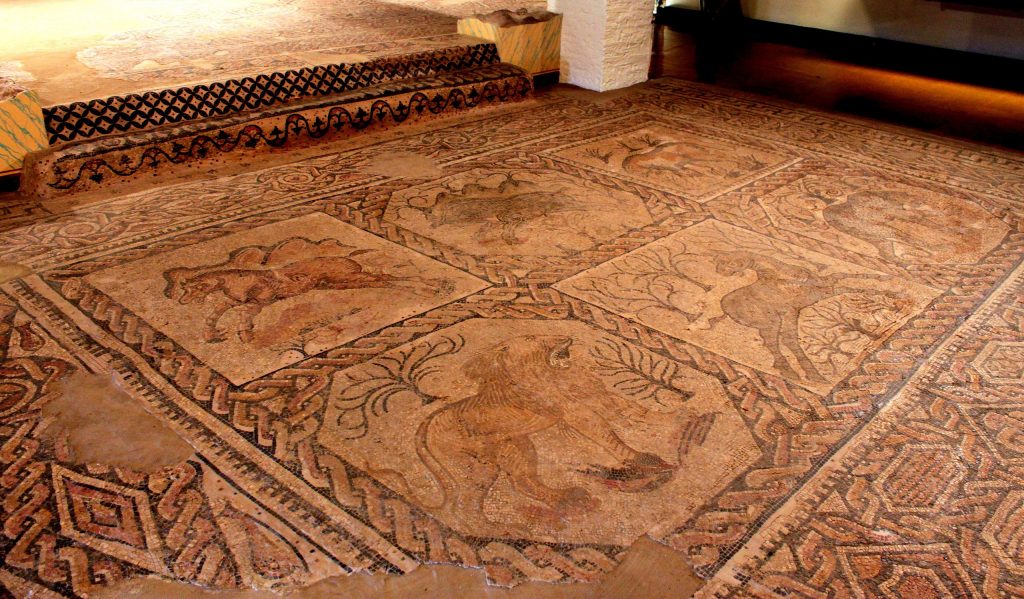 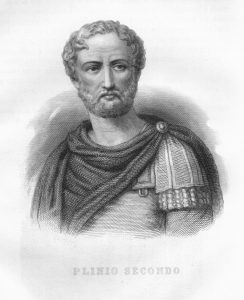 Pliny the Elder according to a modern rendering. Wikipedia.

Aristotle managed an enviable volume of information, which allowed him to write zoological work that had a great influence for centuries. His writings are impressive in their scope as they address natural history in a unified way with all the zoological knowledge of his time, such as anatomy, physiology and the method of reproduction. All this was based on observations, dissections and research with the help of his students and many other collaborators who provided information. Aristotle and his collaborators gathered and examined the opinions of very different people who were able to have specific knowledge about different aspects of life or the behaviour of animals: hunters, fishermen, breeders of horses and pigs, physicians, veterinarians, midwives and others. He was also inspired by literary sources, such as Herodotus. To these second-hand testimonies, he added the results of his own research and that of his collaborators. He carried out dissections of animals, despite the disgust he showed at first, discovering their forms and final causes with an understanding of their structures and functions. Aristotle’s zoological observations are framed within the conceptual framework of his doctrine of the four causes, and are guided by the different vital faculties or faculties of the soul: reproduction, digestion, locomotion and perception. Aristotle’s work remarkably explains interdependence and observations. The latter were not carried for their own sake but for the help they provide in solving theoretical problems.

All this material obtained needed an order. Aristotle aimed to grasp the differences between animals through classifying them. Thus, he built a dichotomous key of genus and species to order groups of animals. These groups fluctuated and were not fixed as in modern taxonomy. He used a comparative method for anatomy and physiology of the approximately 500 species, between mammals, birds and fish, that he described. Their categories were derived from the animals’ ways of life, habits and body structures. He was one of the first natural philosophers to use the idea of the scala naturae, according to which all organisms can be ordered in a linear, continuous and progressive way from the simplest and to the most complex, which he identified as human beings. In contrast to Plato’s descending idea, Aristotle established a progressive upward process that ascended to humanity.

The main biological works written by Aristotle are the five books classified as in De animalibus; Historia animalium; De generatione animalium; De motu animalium; De partibus animalium; and De incessu animalium, to which De anima must be added. He is also responsible for a group of seven small works that make up the Parva naturalia: De sensu et sensibilibus; De memòria et reminiscentia; De somno et vigilia; De insomniis; De divinatione per somnum; De Longitudine et Brevitate Vitae and De Juventute et Senectute, de Vita et morte, de respiratione. Aristotle differentiated between animals with blood, enhaima (vertebrates) and animals without blood or anhaima (invertebrates). Among the animals with blood, he included viviparous tetrapods (zootoka tetrapoda, or mammals), which were warm-blooded, had four legs and gave birth to their young. Cetaceans (ketodeis), different to the previous ones due to the absence of legs, formed a separate group. The group of birds (ornithes) grouped together animals which had blood and laid eggs, with only two legs and a distinct form (eidos) and feathers and beaks instead of teeth, within which he included about 50 species. Egg-laying tetrapods (oiotoka tetrapoda) were reptiles and amphibians, with blood and four legs, but cold, so they formed another group. Snakes (ofeis), which had blood, but no legs, and lay eggs, formed a different group. Finally, fish (ikthies) had blood but no legs and laid eggs. Among them, some had cartilage and not bones, such as rays and sharks. Animals without blood were divided into those with shells, such as crabs, lobsters and shrimp (malakostraka); hard shells (ostrakoderma), such as gastropods and bivalves; soft bodies (malakaia), such as cephalopods; and divisible animals, such as insects, spiders and scorpions (entoma). Other animals without blood included hermit crabs, red coral, sea anemones, sponges and various worms. He did not classify these. 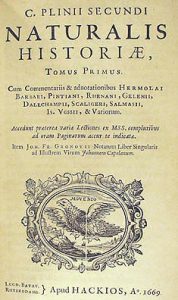 Title page of an edition of Pliny’s Naturalis Historia, 1669. Wikipedia.

In his History of Animals, Aristotle stated that all beings were ordered on a fixed scale of perfection, reflected in their form (eidos). The scale started with minerals, followed by plants and animals, ascending to human beings and forming a scala naturae or the great chain of being. His system had eleven degrees, ordered according to the potentiality of each being, expressed in their form at birth. The animals on the higher part gave birth to warm and wet creatures alive, and those on the lower part to cold and dry creatures in eggs. The system was based on the Aristotelian interpretation of the four elements: fire (dry and hot); water (cold and wet); earth (cold and dry); air (hot and wet). They were arranged, therefore, from the most to the least energetic, the warm and wet ones, created in a womb with a placenta, were the highest on the scale and the cold and dry ones, close to the mineral world as they were raised in eggs, placed below. Aristotle never claimed that the scale was perfect. He was aware of the existence of animals that could be classified in different combinations according to their attributes. It was an approximate classification, a vague conceptualisation, which would not become systematised until the Renaissance. His successor, Theophrastus, would devote himself to the study of botany, which was completely left out by his teacher.

If the tradition of the compilation and cataloguing of knowledge goes back to the Alexandrian scholars, the Romans found a way of presenting scientific data to satisfy the social demand for information by means of an accessible and synoptic collection of knowledge. Their encyclopaedias, designed for general education, displayed the liberal arts (grammar, dialectics, rhetoric, geometry, arithmetic, astronomy and music) that every free man should know. However, they went beyond the first encyclopaedias and incorporated disciplines such as medicine and architecture, which were also very useful due to their practical contributions. The Pliny the Elder’s (23-79) Naturalis Historia covered all the fields of ancient knowledge and was founded on the basis of the best authorities to which the author had access. Thus, this work is a compendium of botany, zoology, astronomy, geology and mineralogy as well as the exploitation of these resources. This book also brings to light the technological advances and understanding of natural phenomena acquired at that time. Their discussions on some technological advances are the only source on them that still exists, particularly regarding the extraction of minerals or the use of hydraulic mills to grind corn. It is also a reference for understanding how artists worked and to study the history of art.

Differences to the Greek tradition with regard to observation and understanding of nature are important. Pliny hardly speaks of his own observations and is not sceptical. On the contrary, scientific and unscientific news are mixed in his reports. Nor can a coherent classification system be observed. For animals he used land, aquatic, flying and insects. He also left behind any comparative approach, such as Aristotle’s. However, he presented animal forms unknown to Aristotle due to the expansion of the Roman world and the discovery of new species. Ultimately, advances in knowledge were very limited compared to the previous period. Pliny showed no interest in Aristotle’s inductive approach. His work on botany was much more chaotic and ended up becoming a kind of glossary, which was, however, very exhaustive. It is evident that it was practical interest that guided his work, so he took time over advice on crops and medicinal plants. His natural history was the first scientific book to be sent to the printing press (1469). In 1550, 46 editions and numerous commentaries had already been made. Translated into Italian (1476), French (1562) and English (1601), Pliny’s text was still published in the eighteenth century. It became a model for posterity because of the range of subjects examined, the need to refer to the authors who inspired it and give a list of indexed contents. It is undoubtedly one of the most successful books of all time and a great source of inspiration.