From darkness to light: a false metaphor

—The beginning of a journey through the production of knowledge on nature in the civilisations of Antiquity: Mesopotamia, Egypt and classical Greece.—

The term ‘science’ has different meanings, all of which are legitimate. It is not at all easy to distinguish science from other types of knowledge. However, to understand the differences between science and other ways of constructing knowledge, it is of great interest to understand the transitions and continuous interactions between these different paths to knowledge. Science has undergone great changes in its content, form, method and function. It is not possible to scrutinise the past to find the origins of modern science, since in ancient times the way of studying nature was very different to the current way. In short, ‘science’ is not a concept placed above time and space. It cannot be understood outside of a particular society and culture. The historical journey is, therefore, a privileged perspective to understand the different meanings given to the word ‘science’.

Science did not suddenly emerge as the result of a particular historical situation. Thus, a particular founding moment cannot be established. Rather, there were partial and ambiguous developments within the complex framework of traditional belief systems. When new ideas and methods appeared, they were either more or less intertwined with or in open conflict with the previous situation, as can especially be seen in the period from the sixth to the fourth century BC. From different viewpoints, this period marks the beginning of western scientific rationality.

In the past, the study of this period has been hindered by a purely Eurocentric view, according to which there was something unique among the Hellenic people or in the Greek spirit that gave rise to this new way of thinking. In fact, the belief in a “miracle”, an unparalleled and unique event, has obstructed research. On the one hand, we must keep in mind that other civilisations, located even further east (in China and India, for example) carried out similar developments, to which the medical, mathematical and astronomical knowledge of the many peoples of America must be added. On the other hand, although ancient Greek thought contains original aspects, the development of a new science was marked by strong links to ancient knowledge. In this regard, the role of the Egyptian and Mesopotamian civilisations and their influence in Greece must be emphasised. The similarities between the contributions characteristic of Greek thought and those of its neighbours in the Near East are as important as their differences. The continuities and discontinuities in the different areas are equally essential. In this way, the change from myth to logos was not a radical change but rather a product of the coexistence of both systems of thought. 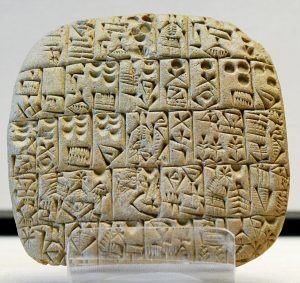 Sumerian contract of sale of a house and field from Shuruppak (Musée du Louvre, Paris, 2600 BC). Wikipedia.

As a result of the conservation of writings on cuneiform tablets from Mesopotamia and papyri from ancient Egypt, it has been possible to discover the many interests that these peoples had in a wide variety of areas of knowledge. A group of specialised scribes, connected to temples, were trained in schools where basic knowledge was taught in order to run the large urban complexes that emerged in the river valley civilisations on the Nile, Tigris and Euphrates. Many skills were needed for the organisation and development of these urbanised and densely populated communities. In Mesopotamia, the need to divide fields, record the volume of the harvests gathered and collect taxes led to the development of mathematics, geometry and arithmetic. In Egypt, the practice of sacrificing certain large animals, such as cattle, promoted the knowledge of their anatomy and the study of their diseases and remedies, learning which was of great value to an agrarian society. 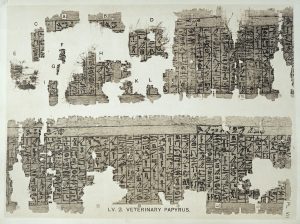 One of the main concerns of all ancient civilisations was the prediction of the future, the progression of nations and their peoples. The systems of prediction and divination were many and varied. One of the most common systems for all civilisations, both East and West, was based on examining the sky and studying its regularities. This was the beginnings of astrology. In the case of Babylon, for example, it was an attraction that eventually led to a systematic observation that lasted for centuries and the accumulation of extensive knowledge about the firmament, planets and stars which was later used. The division of the celestial vault into the twelve signs of the zodiac and the creation of a calendar are features of these first approaches that have remained on our calendars until this day. In reality, the production of this knowledge was guided by interests that were different to those that drive the development of science today. Nevertheless, the truth is that it shaped a highly significant volume of information necessary for the subsequent development of knowledge in the Greek world. 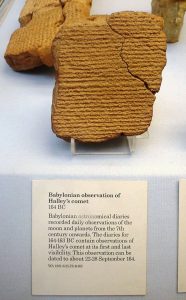 Tablet attesting to the sighting of a comet (probably Halley’s) in 164 BC. (British Museum, London). Wikipedia.

Medicine provides a good example of the change produced in Hellenic thought. Greek medical writers repeatedly insisted on the fact that medicine was an art based on a well-defined method, thus making it possible to carry out important discoveries. The debate did not only involve questions about the best treatment to be used against disease but also questions about the method of medicine itself and the most accurate type of verification. The Greeks defined an area of ‘magic’ and explicitly excluded it from medicine. No one went as far in this regard as the physician Hippocrates of Kos (ca. 460-370 BC), who would have a significant influence on Galen of Pergamum (ca. 129-207) and all Western medicine until the twentieth century with the revival of environmental ideas related to the improvement of health. The argument started in medical writings shows that it was possible to overcome popular beliefs and traditional authorities. All this was achieved by, among other things, the competition between many theories and groups of thinkers within a system where the working of the Greek polis promoted everything related to the art of discussion and persuasion. 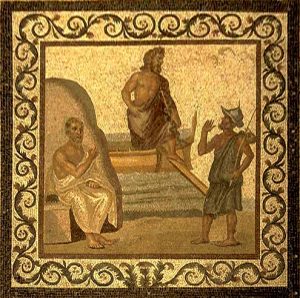 Hippocrates in the Asclepeion of Cos, with the god Asclepius in the centre, 2nd-3rd centuries (Kos Archaeological Museum). Wikipedia.

Around the end of the fourth century BC, medicine and life sciences provided some good examples of empirical practice and research. It is true that some essential ingredients, such as the relevance of experience for systematic research, were still lacking. However, the argument promoted by Hellenic culture, as well as the practices and knowledge produced by the first civilisations of the Near East, created a fertile substratum from which, shaped by the passing of the centuries, the broad set of collective human activities which today come together under the concept of ‘science’ sprouted. The next entries on knowledge in action will allow you to travel back in time to learn more about these changes.

How to cite this paper:
Ferragud, Carmel. From darkness to light: a false metaphor. Sabers en acció, 2020-11-27. https://sabersenaccio.iec.cat/en/from-darkness-to-light-a-false-metaphor/.

Zhmud, Leonid. The origin of the history of science in classical Antiquity. Walter the Gruyner: Berlin-New York; 2006.