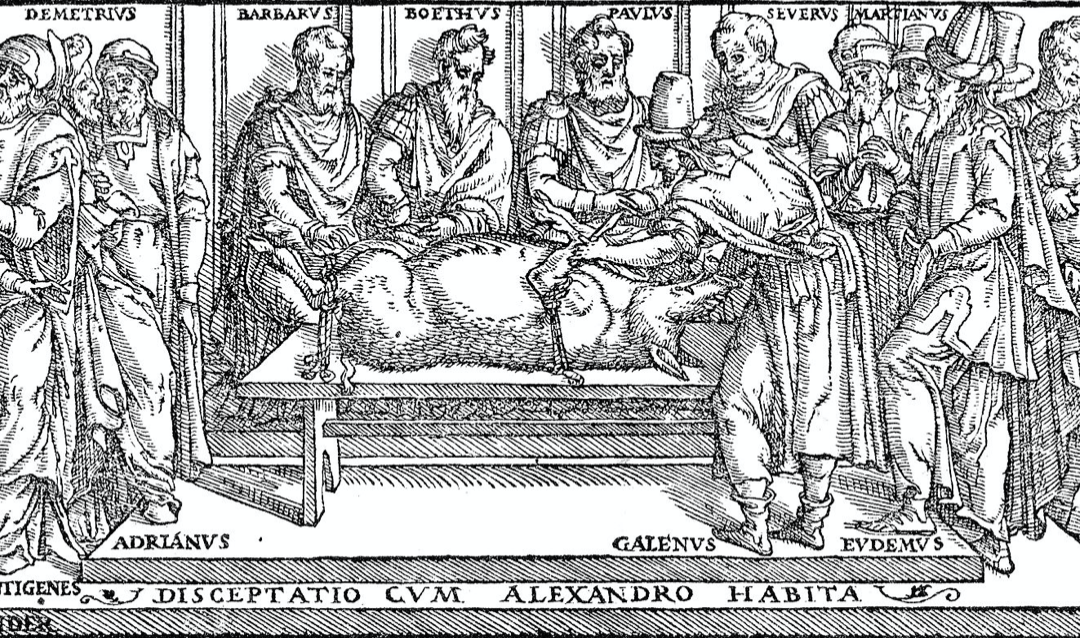 —The synthesis of classical medicine carried out by Galen and his followers succeeded in creating the model that prevailed in the Western world until the eighteenth century.—

Few figures dedicated to the study of the human body, both in health and sickness, and the art of healing from a strictly rational perspective have had the influence of Galen. In fact, ‘Galenism’ as a way of understanding medicine, inspired by the ideas of this Greek physician, was developed until practically the middle of the seventeenth century and its influence was evident in many different ways until the twentieth century. This label (Galenism) must be understood as a dynamic concept in constant evolution, commentaries and discussions that led to a vast doctrinal corpus. Galenism in the medieval or modern age had changed significantly in relation to our physician’s genuine teachings.

Galen was born in 129 in Pergamon, a city under the influence of the Roman Empire, which at that time was a major city at the peak of its prosperity, as shown by its extraordinary urban and architectural development. Galen was the son of a rich architect who benefited from the important construction industry, although, as a philosopher and a man of letters, he was excellently educated in the Greek language. Perhaps the fact that his birthplace was home to a magnificent and famous sanctuary dedicated to the god of medicine, Asclepius, influenced him to the point that at the age of 16 he decided to make a change in his career and study medicine. His extraordinary and varied training, with great knowledge obtained from reading many books that he himself owned, was obtained in Pergamon, but also in Izmir and the Egyptian city of Alexandria, the largest medical centre of the ancient world. His extraordinary knowledge of medicine, especially Hippocratic medicine, was used by Galen to insult his competitors, who were unable to stand up to erudition. From all his teachers and studies, he acquired a series of principles which he never abandoned and personally developed: the pre-eminence of human nature, the theory of the four humours, the importance of prognosis and the holistic approach to an individualistic therapy.

After more than a decade of training, he returned to his home city. There, he became the head physician of a troop of gladiators, maintained by the Supreme Pontiff of Asia. The surgical knowledge that this experience gave him was far from insignificant for his later medical career. 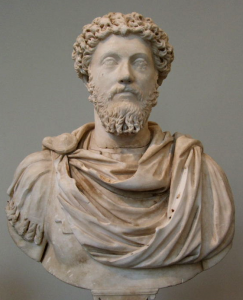 In the year 162 he moved to Rome. His success in treating wealthy and influential patients who had been declared as beyond recovery by other physicians, his vast knowledge, his rhetorical skill in public debates and his ability to publicise himself undoubtedly allowed him to quickly reach fame. His reputation as a philosopher and physician continued to grow, as did his contacts with well-known philosophers and his wealth grew at the same rate. In 166 he left the capital, as he said he was tired of the envy of his professional colleagues, although an epidemic may have been the real reason for his return to Pergamon. Around 168 he was called on by Emperor Lucius Verus and Marcus Aurelius to accompany them on their military campaigns in northern Italy. After Verus’ death, he returned to Rome where he also served Emperor Commodus and Emperor Septimius Severus. Although his Arab biographers thought he died at the age of 87, around the year 216, recent studies do not take this date beyond 207. The debate is still open.

Galen was a prolific writer. Nearly 300 titles are known to have been attributed to him, only half of which have survived in whole or in part. He understood anatomy to be the foundation of medical knowledge and dissected and experimented with many animals such as monkeys, pigs, sheep, and goats. He was a great advocate of dissection as a way to improve surgical ability and carry out research on the phenomena of life. In contrast, Galenist physiology consisted of a mixture of ideas belonging to philosophers such as Plato and Aristotle and the physician Hippocrates of Kos, from whom he took most of his medical teachings. The critical approach to the vast and diverse compendium of works that is the Corpus Hipocraticum, essentially created by followers of the physician of Kos, is fundamental to understand Galen’s medical thought. However, his philosophical training in Izmir, connected to the most important sects (Stoics, Platonists, Aristotelians and Epicureans) was also key; Galen was convinced that a good physician must also be a philosopher (although there were good physicians who were not). To be effective, physicians had to have the weapons of logic to make good a diagnosis and ethics in their relationship with their patients, even if they were not conscious during treatment. Nevertheless, for Galen, ‘scientific demonstration’, the application of logical thought and empirical proof, came above all else. For this reason, he was not very dogmatic and encouraged physicians to think for themselves.

As has been pointed out, his philosophical thought was eclectic. He owes his vision of the universe and the body as a microcosm to Aristotle. He also owes the Stageirian philosopher his vision of the faculties, the body’s abilities to carry out its normal functions, each deriving from a specific combination of elements and qualities at the most basic level. However, his understanding of the body is closely connected to Plato’s Timaeus, which contained medical doctrines that Galen identified as being in line with those of Hippocrates. Galen passionately believed in the existence of a creator, which led him to develop teleological thinking. He also believed in a Platonic tripartite soul, unlike that of Aristotle. 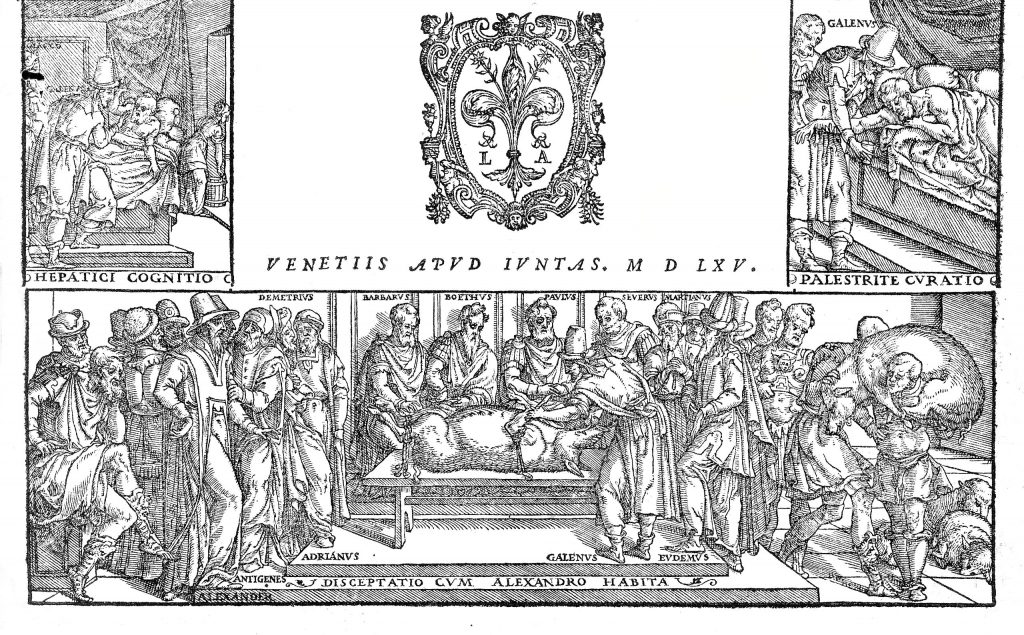 Dissection of a pig, Opera omnia by Galen (Venice, 1565). Wikipedia.

Galen understood the body as three interconnected systems: the brain and nerves, responsible for feelings and thought; the heart and arteries, responsible for vital energy; and the liver and veins, responsible for nutrition and growth. The complex system, highly speculative but intellectually very attractive, was largely accepted for centuries. Based on Hippocrates’ medicine, Galen believed that human health required a balance between the four main body fluids, or humours: blood, yellow bile, black bile and phlegm. Each of the four elements consisted of two of the four primary qualities: dry, wet, cold and warm. However, unlike Hippocrates, he thought that the imbalance of humours could occur in specific organs as well as in the body as a whole. This modification allowed for a much more precise diagnosis and the prescription of specific remedies to restore the balance of the organism. 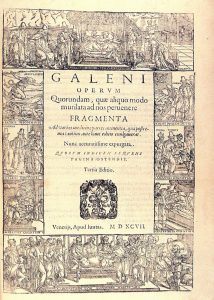 Galen’s works circulated widely during his lifetime. Later, in the sixth century, his texts were gathered together in Alexandria and his theories travelled to the Byzantine world. Around the ninth century, many Greek manuscripts were collected in the Arab world and translated into the language of Mohammed and Syriac, particularly in the court of Baghdad where 129 of his works were collected. Hunayn ibn Ishaq was the main writer who prepared and wrote down these works. During the eleventh century, these texts were translated into Latin and came to lay the basis for medical training in European universities. At the end of the fifteenth century, Italian humanists prepared new Latin versions of his work. In the sixteenth century, a particular vision of Galen as a clinician, diagnostician and anatomist was predominant. Only from that moment would the work of the Flemish physician, Andreas Vesalius, who showed that Galen’s anatomy was more animal than human, and William Harvey, regarding the circulation of blood, drive many of his contributions into crisis. Even so, his work prevailed long afterwards. Galen shows us that twenty centuries ago many of the features of current science were present: training or work trips, the role of sponsorship, rhetorical skill to convince colleagues, controversies and promotion and upward mobility through knowledge.

Mattern, SP. Physicians and the Roman Imperial Aristocracy: The Patronage of Therapeutics. Bulletin of the History of Medicine. 1999; 73 (1): 1–18.